The months leading up to Aviva were busy and I had only committed to race late in the day. These lame excuses and my generic “I’d be happy with a Sub-5.” answer to anyone that bothered to ask took the pressure off myself or raise my expectations for a PB.

The months leading up to Aviva were busy and I had only committed to race late in the day. These lame excuses and my generic “I’d be happy with a Sub-5.” answer to anyone that bothered to ask took the pressure off myself or raise my expectations for a PB. But somewhere in between “the depths of my heart” and “the back of my mind”, (possibly in the region of my Adam’s Apple), I really wanted was to see how close to 4:45 I could push it. It’s in there somewhere…

I got caught up in an awful mess at the start of the swim. I hadn’t raced a triathlon in over 6 months and the lack of race experience showed; I was lined up too far back, jogged into the water instead of sprinting in, tried to catch a draft too early instead of making a break to clear the group. As a result, I got wacked and pummelled as other eager triathletes swam over and into me. By the time the pack had stretched out, we were well into the 1st half of the swim and much time had been lost. I was left with a reasonable draft (for which I am thankful), but on hindsight, I really should have pushed the swim from comfortable to comfortably uncomfortably.

T1 was a lazy effort- as if I was reluctant to start the bike. I felt like a nervous teenager getting dressed to go on a date. “Where does this go?”, “Have I got everything?”, “Should I bring the salts?”, “Race belt positioned properly?” all this dilly dallying took 3 mins when it should have taken half that time.

Both quads cramped hard half way through the bike, after a strong and steady 1st loop. The painful spasms took over and I pulled over to dismount and stretch- thoughts of a DNF crossed my mind. I had been riding with some fast guys and my heart sunk as they disappeared into the distance. Not long after that 2 more huge packs flew past while I stood there in the middle of the expressway, pulling my tight quads back into shape. This was obviously not going to be an easy day; I may be looking at a super slow time or I may be looking at walking most of the way in the run or I may even be forced to stop 10km down the road. Or, I may just be able to pull this one back and save the race.

Claps and cheers from the side of the road lifted me as I gingerly pedalled off to give chase. It was at this moment that the battle really begun. I rode very conservatively for the next half lap as my legs were still twitching- threatening to fail on me at any moment. I prayed hard and the cramps eased as the electrolytes took effect. By the last lap I was able to hold a reasonable speed- catching and passing people. But the faster age groupers that I had been racing with were still some way off. Talk about clawing my way back…

Off the bike in 2.30 mins – Not bad everything considered. T2 was packed and it took forever to get my bike racked. The compression socks took an eternity to pull on and what should have been a 1.5 min affair again turned into a 3 min ordeal. Calculating the lap splits for a PB, I knew that it was going to be painfully close, but by now, I was ready to hurt myself.

It was stinking hot, windless and humid. Great conditions for a run! I started conservatively hopeful to build into it, but the cramps were relentless and disabled me every time picked up the pace. Quite a few times I was forced to stop and stretch as the precious seconds ticked by. I was really suffering and the Nuun tablets that I had been munching on (6 in all) did little to restore normal function to my legs.

Fortunately many students, past and present were on the sidelines that day screaming me on. Their support alone gave the suffering some meaning and fuelled me towards the finish line. Running past Mel, Vinnie and the supporters in our ironguides tent, I was reminded of how far I had come, and how blessed I have been, in the short time since starting this crazy journey as a Tri Coach.

I crossed the line wasted, in 4:52, in pain and inspired to take this as far as it will go.

If you are reading this- Thank you! This race was for you : ) 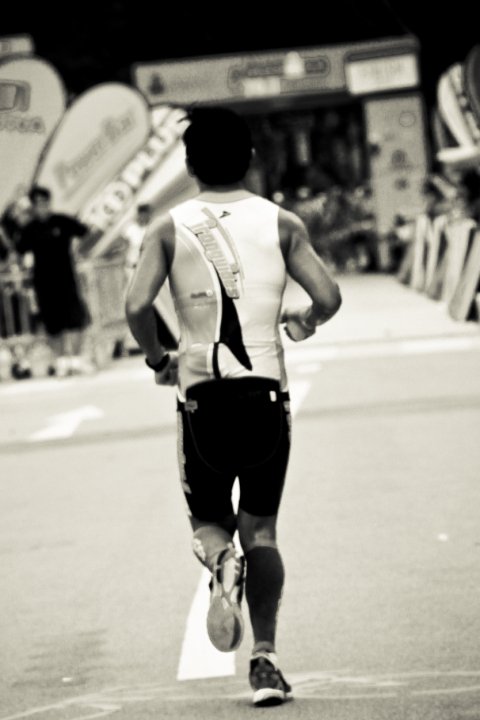